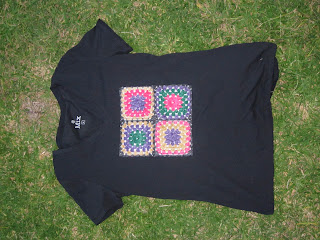 Pascoe Vale Spinners & Weavers have their annual show on next weekend, June 2 & 3 at the Swimming Pool hall, Prespect st Pascoe Vale, 10am-4pm.  I have been there several times over the last few years, and the quality of work on display, and beautiful hand spun wool for sale, is just amazing!
I am planning on wearing my "granny squares" t-shirt made. Granny photo print fabric found at the craft show a while back. I wore it to the Brunswick knitting & wool show a few weeks back, and had lots of comments. Mostly positive, although one lady grinned at me and said "well that is just cheating!"

(sorry, I turned the photo around, but when I pasted it in it unturned!)
The Yarn Barn in Reynard St also has some fantastic balls of wool on sale, $2 each - the whole left side  shelves of the shop. Dropped in today to buy one ball I saw a week ago, couldn't see any more of that, but ended up with 4 others instead (like I need MORE wool!!!). 1 ball should be enough to make a scarf with my easy dropped-stitch pattern from  my "Stitch & Bitch" knitting book.

Will try and get the the PO for Craft Group again next Monday28th too!
Posted by Dianne at 18:11 No comments:

Mary Kathleen Webster was born  September 2 1938 in Rochester, Victoria. The  only girl and forth of 6 children. Mum went to school in Rochester, and also in Maryborough when the family moved there in 1950. The family moved to Nanella in 1953, then to Bendigo after that.
Mum was working  at a jewellers in Bendigo when she met Dad. They married in 1966. I was born a year later, & my  sister Meredith 3 years later.

Mum told M just last week that she lived a very happy life together with Dad, he was a good husband and they enjoyed lots of holidays, with friends and our family. Family holidays were particularly special to her.
In 1978 we had our first big family trip and drove to Queensland to visit our aunt, uncle & cousins in Brisbane. September became the time for our annual driving holiday, which meant we were often away for Mum's birthday, but she never complained.
There were several trips to various parts of Australia including Tassie, back to Qld, SA and the NSW coast. In 1985 we  made our longest trip, driving to Alice Springs & Ayers Rock, accompanied by Mr & Mrs B.

As kids, most weekend were spent "throwing a rod in" (fishing), exploring the bush, sitting at the gun club, or at "The Shack" (family holiday shack) in Barmah. Barmah weekends usually meant fishing in the  boat on the Murray, and Meredith would delight in having a turn at steering the boat - right under the overhanging willow branches, which would of course brush over Mum & make her jump, every time.

Every Easter since we were little, we went to Torquay. Mum usually gave up eating icecream for lent, so Easter sunday always involved chuch followed by a trip to one of the Torquay icecream shops!  The Easter holiday became even more special once the grandkids arrived!

Growing up, mum enjoyed the annual circus that came to town, and as kids she ensured we had similar opportunities. We enjoyed trips  special trips to Melbourne for shows like "The Moscow circus on Ice"; "Disney on Ice"; Pompei; and Dinosuars from China.

Mum was always supportive of us, and encouraged us to do well at school & to go to university; saying we could do anything we wanted to "if you put your mind to it".

Mum showed us the importance of being involved in the community and was herself actively involved at our primary school, Flora Hill. We remember her going to the "Mother's club" meetings, working in the canteen, helping with reading groups, photography, baking for the fete and helping run cake stalls held at the local Woollies. Mum was also a very passionate Sunday School teacher, and would often involve us in making her lesson materials.

No surprise then that Meredith is P&F president at her kid's school, and I am on the PFA & school council at mine. The sense of "giving back", being part of the community, came from Mum & Dad.

Once we were both at school, Mum enrolled in a sewing course at the Bendigo TAFE. Dad had bought her a singer sewing machine with money from fox skins!  Mum made lots of dressed, skirts, pinafores and a much loved corduroy jacket for each of us. Of course everything was made in 2's - same pattern, same or sometimes different colours, 1 for each of us, it had to be fair!

The Women's Weekly magazine was always a great source of inspiration, we were always amazed that we could show mum a pattern for something in the magazine or a craft book, and she could make it for us. Cakes & recipes too - I remember a cake made to look like a record (ABBA of course!) Mum copied from the WW for my 10th birthday.

As we grew up, Mum continued sewing, making some beautiful dresses for us, including bridesmaid's dresses for M's wedding, and even occasionally something for herself.
One Saturday evening, Mum was frantically trying to get a dress finished for M to wear to her college graduation ball. Her friends arrived to pick her up, but the dress wasn't quite finished & mum was still sewing. Our new dog Mich was still a puppy, and he heard the visitors arrive and was barking outside, so Mum said to let him into the back room to stop him barking. Within minutes we heard crashing & banging, because the pup, determined not to be ignored, had destroyed all the newly watered pot plants in the room, spreading dirt & muddy paw prints over everything!  Somehow mum kept her calm & kept on sewing, got the dress finished, M dressed & out the door, and the came to survey the damage!

When I said I didn't want a traditional wedding dress, Mum searched through all the pattern books, and even travelled to Melbourne to drag me around Lincraft; tried & tested patterns; and made my beautiful medieval skirt, blouse & vest.

Knitting however, wasn't her cup of tea. Meredith recently found an unfinished jumper mum started knitting her when she was in primary school.

Mum didn't actively teach us how to sew or cook. But we think being around her cooking, baking & sewing definitely rubbed off on us, because both of us enjoy sewing & making things, and cooking & baking.

Family was central to Mum, and celebrations were certainly done in style, although she never made a fuss. Many events in our lives were celebrated at home, with mum doing all the catering and organizing; such as our 21st birthdays, Dad's 60th, Webster family reunion, a gathering of Dad's duck opening group, M&B's engagement party, and most Christmases.

Family was even more special to mum once she had grandchildren.
Although Dad was regularly away on weekend fishing trips, we had never known mum to go away & leave dad at home - until her first grandchild was born. When I cam home from hospital with J, Dad & mum drove to Melbourne, and then mum stayed for a week to help out with the new baby.

Mum has four grandchildren, JH
J, MC & H all of whom adored her.

For the last 5 years, Mama 7 Papa have collected J & H from school or kinder once or twice a week. Suddenly the variety of food in their pantry increased, "boat" sandwiches were made when ever H requested, ballet was practiced in the lounge room, and many a detailed chat about their day was shared between Mama and J.

JH & M shared their lives through trips between Bendigo & Melbourne, phone calls and photos. Granma was always excited to hear MC's latest piano recital, to follow JH's adventures at cubs and scouts, and to hear the latest antics of the chooks!

Since Mum's diagnosis in May 2 years ag, she showed true strength and courage. Never did she say "why me" or feel sorry for herself. Instead she tackled it face on, and turned what was to be six months into two years. Her strength and stubborness was no more evident than when in hospital before Christmas last year, when she told Meredith that she wouldn't make Christmas. Together they made a deal to have one more Christmas, and through her determination we enjoyed Easter as a family too.

We know mum genuinely appreciated all the support she was given during her illness, including from the St John of God oncology nurses, whom she called her angels.
Mum it has been an honour to have been able to call you mum.
Your strength is our inspiration. Your love our rock. We will always miss you and love you Mum. And we will keep the promise to look after Papa and Max.