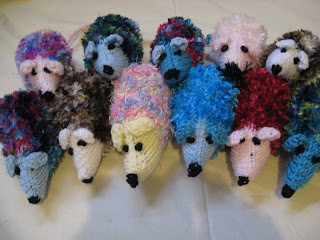 Lots of wonderfully woolly things to do and see in Moreland this weekend and next.
Saturday 28th May
"Wool and craft fair"
Brunswick Town Hall, 10am-3pm.
I will be there! Lots of beautiful hand spun wool and knitted articles on show and for sale.  I went a couple of years ago and was talking to a girl from a Bendigo wool shop (Busy Bee? I think) and I said that I was from Bendigo, then she said "Hang on, I think I know you..." - turned out I had taught her when she was a kid and I was doing some CRT (emergency teaching) work! Small world huh! (Not to mention  making me feel old!)
Then she went and got her mum to say hello - she had been the art teacher at the same school, and I had filled in for her in the art room many times (because apparently most teachers are scared of teaching art! I picked up a lot of extra work because I was quite happy to take on a day of art teaching!).
The following weekend -
Saturday 4th and Sunday 5th June
Annual Exhibition from the Pascoe Vale Spinners and Weavers
10-4pm  Swimming Pool Hall, Prospect St
(left off Cumberland Rd, just before my favourite little op-shop which is on the right hand side as you head north from Bell St).
This show is definitely one NOT to miss.  There are demonstrations and activities (how to make hand felted flowers last year), and the most stunning, beautiful, amazing art works on display - all made of wool.  Previous years I have seen an incredible knitted and felted moebius strip bowl; an amazing wall hanging made with a combination of  knitted, crocheted and knitted patchwork pieces; and a terrific display of hand spun and hand dyed wool, all coloured with an assortment of native leaves and flowers.
PLUS beautiful hand spun wool and knitted/crocheted/felted/woven scarves/beanies/gloves/socks/jackets etc. on sale for very reasonable prices (considering the hours of work and lovely wool they are made from).
Posted by Dianne at 12:57 2 comments:

Have you heard about Yarn Bombing? Have a look here http://ixchelbunny.blogspot.com/2011/03/viva-yarn-revolution.html for more info and photos.  My H has spotted a couple of new "items" along the Melville Rd tram line - near the corner of Albion St out the front of the furniture shop, and across the road a bit further down, there is also one out the front of the new cafe (can't remember the name, it has only opened recently).  Brunswick Bound bookshop has a yarn bombed door handle.  I think I need to go for a walk with my camera!
Apparently June 11 (see link above) has been declared "international day of yarn bombing"!!! Might just have to join in!
Craft group is on next Monday 30th - I can't make it as I have a meeting to start getting the school music trivia night organized.
Posted by Dianne at 21:37 No comments:

Yes craft group is on tonight! 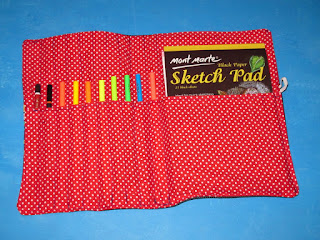 We had 10 people last week, hope to see you all again tonight 7:30 at the PO.
Tried to post this last night, but typical bloody dodo connection - NO SPEED!!! Back to zero again today so I don't like my chances now either...
I have actually been doing some sewing now and then... here is the pencil roll I made for my niece's birthday.  Denim and babushka fabric on the outside - same as my jeans bag I made last year. It was a big hit!
Posted by Dianne at 12:54 No comments:

Fingers crossed things actually work this time!
Up-coming dates - the  North Essendon Farmer's Market is on again this Saturday, Lincoln Park Essendon. Lots of great food - we love the potato bread from Mattise Bread.  Lovely jams, cheese, fruit and veges too.  We discovered the market on the way back from swimming lessons one day, and it is a regular on our calendar now - the 2nd Saturday of the month, 8am-1pm.
Also this Saturday - the Blackbird Design Market is on, 10am-4pm at the Worker's club, cnr Brunswick & Gertrude Sts Fitzroy.  I don't think I'll get there, but it looks interesting.
The Flemington market is on Sunday 22 May (I took the family along last year - we were there 5 minutes when the heavens opened and it HAILED like you wouldn't believe! Needless to say we turned  around and damply went home again). The North Melbourne Market is also on, always worth a look - love the vintage fabric for sale there.  And the school working bee, and an 8th birthday party - not sure how we will juggle all that!
Posted by Dianne at 22:11 1 comment:

Who would have thought... 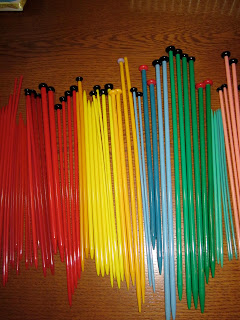 ......that a bunch of knitting needles could make a rainbow? ! And if I can find the how-to that I know I read a while back, they can make bracelets too!!!
Lovely to see SO many people at craft group Monday night - a record 10 craftsters! Even the waitress commented on our good turn out!
Don't forget - the Frankie talk is on at the Brunswick library tonight, anyone want to come with me???
Posted by Dianne at 14:59 No comments:

The weekend that wasn't quite as planned...

Well, what a weekend!  The kids were really into the royal wedding, studying the map and layout of the abbey in Friday's Age, and staying up til 10:30 to watch it all!
Saturday we all headed over to Thornbury to have a look at the  Made in Thornbury market.  We also picked up some bargain books  (a Star  Wars movie book, the "big,big,big book of Tashie") and a cool board game "castle keep".
The books and game came in very handy when we tried to go home again for lunch at 1:30 and were stopped in our street by the police, who wouldn't let us go home.  There was a "situation" with one of the tennants in the house next to us, and there were a gazillion police officers all over the place! (Including in our back yard, as we discovered once we were finally allowed back home.  They had used one of the kids's chairs to stand on and look over the side fence!).  A friend and neighbour further up the street sent a message at 6:30pm to say they had finally all left.  We thanked our lovely friends who had come home to take us in for a few hours and feed us cups of tea and chocolate biscuits while we waited;  and finally headed home.
5 hours of limbo, not knowing what was going on, or even if we were going to get home at all that night! One police officer told my husband that we may need to consider sleeping somewhere else that night, which was actually what we had planned  - to go to the in-laws on the other side of town, because my H was in the Great Train Race 9:30 Sunday morning, and we were catching up with my neice for her/our birthday last week too!  But of course we needed to get home  first to pack our bags, feed the chooks, set the timer to record the new episode of Dr Who (all the important stuff!) etc.
But it all worked out ok, we got the the in-laws for a late dinner at 8pm, got up at 7:30 the next morning, and made it to the race - and he even managed to beat the 2nd train and run a better time than he had thought he would!
So that is why we were late to school today - we let the kids sleep in til 8:30 'cos we were all quite buggered after all that!  Tigerboy walked in the school gate saying "if the teacher asks why I'm late I'll just tell her about the police seige and the train race"!

See you at craft group tonight!
Posted by Dianne at 12:20 No comments: