Have you seen the newest kmart ad on tv? Keep an eye out for it, it is my new favourite ad. It is nothing fancy, just a mum and a 3 year old in a shopping trolley.  They are walking through a kmart store and and mum asks the little boy to look for some numbers "let's see if we can find some numbers" or somesuch. So he points out "5" and "2", and mum says "yes 2, hmm mugs $2, lets get ...2".

What is so good about this ad ? - it is about "environmental print" - how you teach your kids to be aware of print (words and numbers) around them in everyday life, the start of learning how to read! As  a primary teacher I love it!  The mum picking up 2 mugs to buy - even reinforces the concrete 1:1 number of 2 items, matching the printed number 2 on the sign!
I'm sure they didn't intend this ad to be a teaching tool, but it is just perfect! 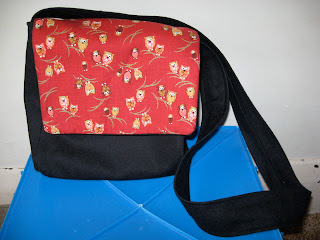 First I made a new handbag...

Then using this pattern, and this most excellent book... 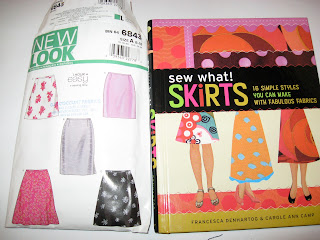 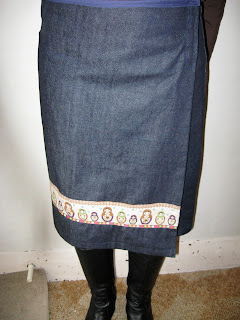 Denim wrap skirt with babushka and ribbon trim (bargain denim from Rathdowne Remnants - $7.50 for 2.5m because it had a water stain on it - which came out in the wash.  And the skirt uses less than a metre. There will be more denim skirts to come!)  The babushka fabric was from the Kelani stall at the Stitches and Craft Show, with a bit of ribbon from Spotlight. 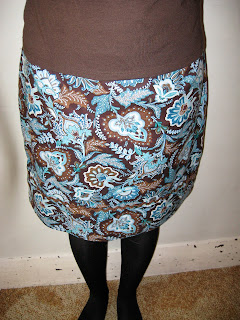 Blue and brown fabric from GJ's, brown ric-rac from Rathdowne Remnants (yes, you have to look closely for the ric-rac).

It took a while to tweak the pattern, but it was well the effort. I have never made a skirt before! Now I am hooked! And thanks to the" Sew what! Skirts" book, I used two different finishing methods for the waitbands - bias binding for the denim one, and a facing on the blue/brown one - neither of which is in the original pattern!  The book explained how to use the A-line pattern to make a wrap-around skirt - and it worked!
I will be going back to work next week with a whole new wardrobe! I am really quite chuffed with the results!
Posted by Dianne at 16:28 No comments:

It has been a very quiet start to the school holidays this week, both boys have come down with a dreaded lurgy, and have not been up to much. But at least I have got some sewing done, finally used my owl fabric bought from GJ's ages ago to make a new handbag, and have been experimenting with a bought  pattern to make a skirt. I tried last hols with another pattern, it was a disaster! So I have been very good and made a "muslin" version out of calico first, which I have already had to modify once. Thank goodness I didn't cut it out of my good fabric!  And I am so glad I have been reading Nichola's blog  http://nikkishell.typepad.com/   with regular sewing tips; she often talks about making a muslin first and tweaking patterns.
Pattern sizes are crazy- I had to cut out the size 18/16 pattern - to make a skirt the same size as my (op) shop bought size 10/12 skirts! Are  all  patterns like this?
Posted by Dianne at 17:45 No comments:

I made this Potato Slice for dinner last week, and took the left overs to work for lunch. A couple of people asked for the recipe, so I thought I would post it here.  It is sooo easy, very yummy as a side dish or main, and you can add in whatever you like.  It makes a nice change from traditional scalloped potatoes or mashed potatoes (which I have only been able to eat again in the last few years, I always say  one of the best things about moving out of home was not having to eat mashed potato all the time!

Wash peel, steam (I use our microwave vege steamer for nearly everything!) and mash 8 large potatoes
Add 2 tbspns butter, 1/2 cup milk and a cup of grated cheese
(I buy a bag of  grated tasty and a bag of mozzarella, mix them up and distribute into  former dip containers, and put them in the freezer. Makes about 10 lots of grated cheese.)
Add in 4-5 lightly beaten eggs, mix to smooth creamy texture.
Spread mix into lightly greased oven dish, sprinkle bread crumbs on top, dot surface with butter if you like (I usually forget to!)
Bake in a pre-heated moderate oven 45 mins or so, allow to rest in dish 5-10 mins before slicing.

You can add other  steamed veges, chopped ham, parsley etc.

I also made this "lunchbox" slice last week, a double batch will get me through the entire family's lunches for the whole week!  Plus it only uses one bowl and one knife - less washing up is always good! It has the added bonus of only taking about 12 mins to cook, so when I go to make up the kid's lunches at 10 o'clock at night and realise we are out of homemade snacks, I can whip this up nice and fast. I don't like baking too late at night, because our oven has a very annoying habit of randomly going out, not good when baking a mud cake which can take over an hour to cook - and the bloody oven goes out AND I DON'T NOTICE til 40 minutes in!!!

Pre-heat oven 180, line slice tray with baking paper (whatever did we do before they invented this brilliant stuff!)
Melt butter in microwave mixing bowl, add in all other ingredients (I just crumble the oat brits in as I go)
Press mixture  evenly into tray, bake 12-15 min or until golden brown and bubbling.
Cool, then cut into squares.

I always made this with oats, then decided to try out the puffed wheat cereal, which makes a nice variation and is actually even more yummy! Plus it is good to have a slice without oats, because my other two standard lunch box slices both have oats in them! I am still trying to find one more quick, yummy lunchbox friendly slice recipe - I figure 4 different slices, making one per week, will give me a good variety for the lunchboxes that hopefully no-one will turn their noses up at!

Anyone for a cuppa? 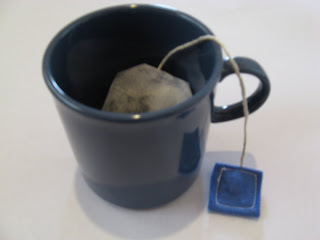 My latest idea for the craft stall - when I am going to find the time do do all this is a WHOLE 'nother story!  But I figure there will be a day or two in the school hols of staying home while the kids get knee-deep in lego, so I just might be able to spend a day sewing.
I saw some "play" teabags on http://www.madeit.com.au/  the other day, and remembered that I had made some for the Jedikid when he was little.  So I took a  real tea-bag apart and made a toy one.  I will write up a tutorial for it soon. But I must admit an embarrassing fact here - when I went to take a photo, I realised I do not posses a single china teacup and saucer at all! Thousand of mugs of all shapes and sizes, but no teacups!  I guess  I can't stand the smell of tea, and I don't drink coffee either (coffee flavoured cakes/biscuits/chocolates are another thing entirely though! I don't say no to those!), hence the lack of teacups!
Posted by Dianne at 10:31 No comments: 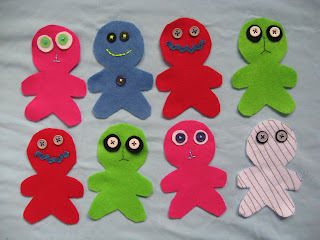 I have been making a range of these critters for the school craft stall in November.  In theory, I will pin them onto a sheet of felt and sew around each one (maybe poking a bit of stuffing in there at the same time) and then cutting them out. In theory, will get back to you on that one...
Posted by Dianne at 23:37 1 comment: 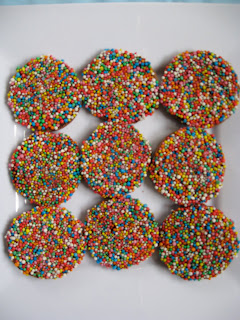 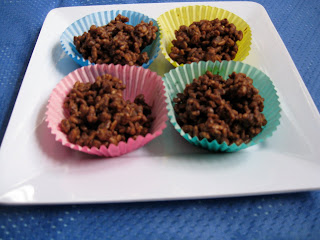 Tigerboy turned 7 yesterday! We had a mini party - afternoon tea and a play at the park with family and friends on the weekend. Tried out a new recipe for giant freckle biscuits found in a copy of good old WW left on the kitchen table at work earlier in the week.  When I say recipe... more that I used the idea - I made my usual "easy to roll out and cut shapes" biscuit  recipe - with added cocoa- and coated them in melted choc.  Much easier and better looking end result to dip the choc coated biscuits into a bowl of 100's & 1000's though than sprinkle like the recipe said - I would have been vacuuming those tiny coloured balls up for the next 6 months if I sprinked! Used nearly a whole bag of them too! They were very tasty though!
I made a batch of what I call "grown up" chocolate crackles, from the current Donna Hay kid's party annual. No copha - 'cos seriously, who keeps that in the fridge "just in case"?- but of course there are always rice bubbles (for last minute dinner invite mars bar slice) and cooking chocolate in the cupboard.

In fact there is a whole special section in the cupboard just for chocolate, I mean you have to buy up when it is on special don't you? And you never know when you might need to make mudcake, which now involves a block and a bit of chocolate thanks to Cadbury's stupid idea of reducing block size from 250g down to 200g -contrary to most recipes in my Cadbury Cookbook which require a 250g block. Sorry, just had to get that off my chest.  Anyway, the kids had a great time at the party and much yummy food was consumed by all. Must tell you  sometime about this year's  birthday cake challenge too, that was a doozy!
Posted by Dianne at 23:58 No comments: 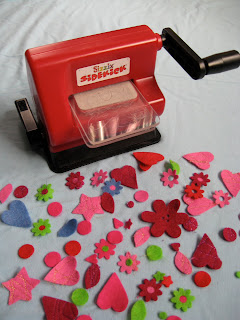 Craft Group is on again next Monday night 6th September, we might have a break over the school hols after that, but can talk about it on Monday. I might bring my "new toy" along again - my wonderful little sister lent my her sizzix die-cutter machine.  It was put to good use last craft group, and at home, to cut out lots of little felt hearts, dots and flowers. Felt heart/flower plus glue gun and hair clip = nice and easy stock for the school craft stall in November!  I made a couple of clips already, Tigerboy has a birthday party to go to on Sunday, so I am going to make up a little package of various hair clips in a zippered purse for the birthday girl.
Posted by Dianne at 23:02 No comments: